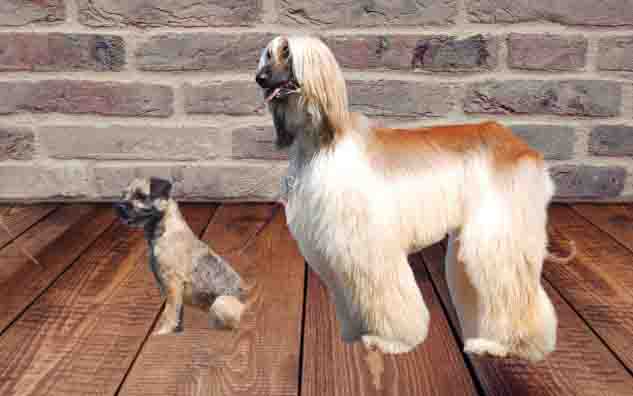 Afghan Hound dog breed: Afghan Hound is a thin and stylish breed with silky coated long hair. This dog breed originated in the middle east in ancient times. The Afghan hound is very well known for its fearless attitude. The Afghan hound is mostly found in mountain or cold areas. It’s been centuries since this dog came into existence and till then this dog has been able to gain popularity worldwide.

This dog is highly smart and used for hunting in an early time. But training this dog is difficult because of its stubborn nature. The cost of maintenance is very high compared to other dog breeds. Actually, there are several reasons for it. They need grooming every day which is eventually one of the reasons for high maintenance.

The original name of the Afghan hound is Tazi given by the people of the middle east. The Afghan hound was first transported to England in 1925 then it has been taken to America. The dog is recognized by the American Kennel Club and Indian Kennel club.

Afghan hound doesn’t like to stay with any other dog breed. If you keep them with other dog breeds they will feel offended. The independent nature sometimes really makes it difficult to train. The personality of the afghan hound is way different than other dogs. If you treat them gently with love and care then they will surely listen to you. The Afghan hound is one of the highly sensitive dog breeds.

Some important points to remember about the Afghan Hound dog breed

Afghan Hound is normally considered one of the healthy breeds. But still, sometimes they suffer from different diseases. There are certain conditions that can affect their health.

When You buy a puppy look for a good breeder and check all the documents and health reports. And also check whether you can take this dog to a particular condition.

Greatly valued for their speed and fearlessness. They are good-tempered, faithful, and good guards but not a watchdog. Afghan Hounds need a lot of time to groom so you should make sure that you have enough time on your hand.

They need a high level of care because if you handle them roughly then you will not be able to train them.

They are made for certain weather conditions so you should be careful about that.

Afghan Hounds are thin and don’t eat much as compared to other dogs. So If you give them food twice daily then it will be enough for them. It’s easy to maintain a puppy than an adult Afghan hound. Because a puppy looks completely different than an adult one as they have very small hair, not like an adult. So it takes way less effort to feed and care for the young one.

It is not common knowledge that Afghan Hounds are violent. It’s better to leave them alone when they are obviously in need of some alone time because they have laid-back personalities but do prefer their own space. When around smaller animals, it’s advisable to keep a watch on them due to their strong prey drive and hunting instincts.

Can Afghan Hound live in India?

In India, the Afghan Hound is rarely seen. It is provided based on dog lovers’ needs and is only accessible at high-end, pricey dog stores in major cities like Delhi, Mumbai, and Bangalore.

How to groom an Afghan Hound dog?

Prior to grooming, the Afghan Hound should always have a bath. During competitions, the coat should be moistened with a good grooming spray before being brushed. Always brush from the skin out, parting the hair with your blow dryer. To reach mats in hard-to-reach places like the armpits or the region behind the ears, use your fingertips.

It is not common knowledge that Afghan Hounds are violent. It’s better to leave them alone when they are obviously in need of some alone time because they have a laid-back personalities but do prefer their own space. When around smaller animals, it’s advisable to keep a watch on them due to their strong prey drive and hunting instincts.

How intelligent are Afghan Hounds?

Afghans are extremely brilliant, yet because of their stubbornness, they can be challenging to teach. They are extremely sensitive to severe reprimand, which frequently results in disobedience. They react well to stern yet mild discipline and direction.

Afghan Hounds are wonderful family pets because of their affectionate and sociable demeanor. Despite their independence, they may be quite devoted and enjoy playing all day. Puppies of the Afghan Hound breed may interact with kids of all ages.

Afghan Hounds are typically not advised for first-time dog owners since training them may be so difficult.

Where do Afghan dogs come from?

In Afghanistan’s hill area, a breed of dog known as the Afghan Hound was evolved for hunting. There is no evidence to support the old claim that it started in Egypt, some 3,000 years ago. In the late 19th century, British soldiers who had just returned from the border conflicts between India and Afghanistan introduced it to Europe.

They are fiercely observant, suspicious of outsiders, and devoted to their owners. Compared to the males, the females appear to be more guarded. Most would-be robbers are scared off by their loud, vicious bark and bulky girth!

The Afghan Hound can excel in dog agility competitions and can serve as a sympathetic assistance dog and companion.

Despite not being lap dogs, medium-sized puppies weighing about 50–60 pounds might be a decent match for an apartment dweller if exercised often. Just remember that while bright, an Afghan Hound is also quite independent; they’re difficult to teach, and their disposition is sometimes compared to a cat’s.

Can you leave Afghan Hounds alone?

Afghans are not a dependent breed, despite their affection for their people. If they are bored or don’t have enough opportunities to exercise, they may turn destructive. Although they could be able to spend four to six hours at home alone, crate training will keep an Affie secure.

The Afghan Hound is a sight-based hunter that has been employed to track gazelles and leopards in its native Afghanistan. The animal’s high, broad hipbones allow it to adapt to harsh terrain. The Afghan dog is a long-legged breed that reaches 25 to 27 inches (63.5 to 68.5 cm) tall and weighs between 50 and 60 pounds (23 to 27 kg)

Afghan Hounds are highly sensitive and don’t like to socialize. They are smart enough but don’t think they are easy to train. Afghan Hound is highly protective of known people and is very cautious. They are very good companions of children and they love to be around kids and play with them. Afghan Hounds are fearless and loyal in nature but don’t like to stay with other pets. This breed is highly sensitive to pain so you need to give some extra effort to care for this.

So these all were about the Afghan Hound dog breed, Hope you have liked it.