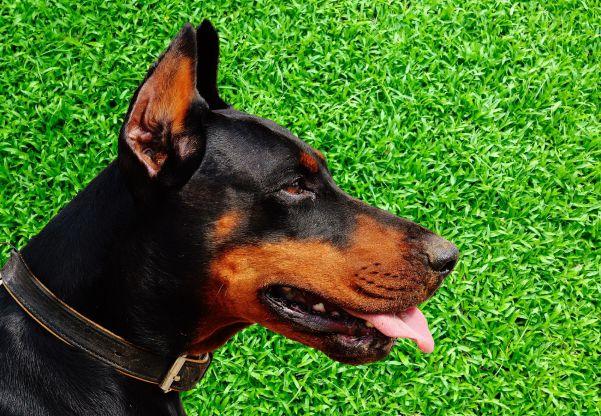 Doberman Pinscher: The dog we are talking about is sleek and powerful here. It possesses both a magnificent physique along keen intelligence. It’s all characteristics make this dog one of the dogkind’s noblemen.
The breed is featured with vigilance and fearlessness that makes this breed stands proudly among the entire global finest protection dog. 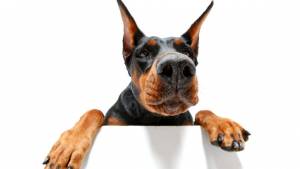 This breed is considered to be originated in Germany and is popular as a guard dog. The pup of this breed looks more like an aristocrat because of their sleek coat, regal appearance, and athletic build. Doberman is a highly energetic breed.

This breed is among smart breeds as they perform very well in police and military work and are also good in canine sports. They are also perfect dogs as family guardians and companions.
This breed is featured with muscular good looks and a proud gait. They were also consistent winners in the ring.

Germany is considered the origin of this breed during the late 19th century. At that time, this breed was popular as a guard dog. We are not sure about the actual history of this breed, but it is believed that this Doberman is a mixture of many dog breeds. The ancestor of this breed is believed to be Rottweiler, black and Tan Terrier, and German Pinscher.

This breed is compactly built dogs and they are fast, muscular, and powerful. This breed stands between 24 to 28 inches at the shoulder.
Doberman is characteristic sleek but substantial and the breed is covered with a glistening coat of blue, red, black, or fawn with rust markings.

The breed we are talking about is not only strongly built but possesses a noble, wedge-shaped head. This breed has a characteristic athletic way of moving which combined make this breed earns a reputation as royalty in the canine kingdom.

It is super intelligent and super active. Having a Doberman makes you possess an extremely trustworthy, loyal dog who is powerful along with playful and fun-loving with family.

This breed is ideal as it is not aggressive without any reason but never steps behind in case its family in danger. They never hesitate to act when they feel their family is in danger.

They are quick learners thus training is much easy in the case of Dobie. The best thing about this breed is that it remain puppyish until they are 3 to 4 years of age. 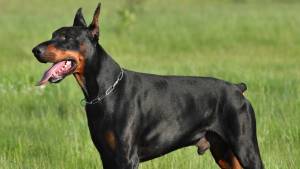 The temperament of your Dobie mainly depends on multiple factors like heredity, training, and socialization. Proper training will make your pooch curious and playful and will love meeting new friends and people.

Read about: Things You Most Likely Didn’t Know About Rajapalayam Dog.

The long muzzle and underbite of the Doberman give it the most distinctive and recognizable dog look. The fore face is narrow and short; the snout is short, wide, and triangular in shape. The overall appearance of the Dobermann resembles that of a tiny Rottweiler but is much smaller with a slender, long body, larger head, and stockier tail.

The most reliable way to assess a dog’s Doberman temperament is to ask the owner for a close examination of the dog. Ask the owner to touch and feel each breed component (length of coat, body shapes, overall looks, and color of eyes) and note his or her response.

Ask the owner to describe each breed component and note whether the response is hesitant alert, fearful, or timid. This will help you understand the behavior patterns and general attitudes of each breed.

The personality traits common to many breeds of Dobermans are easy to recognize. Some of these traits (such as alertness and intelligence) are more apparent than others. Because of their strong, confident personalities, the Dobermans make ideal companions and are known throughout the world as good house pets.

The only way to truly evaluate a dog’s temperament is to spend time with it and observe its interactions with people and other animals. With a little help from professional dog groomers, Dobermans make perfect family pets.

The high quality of commercially manufactured food is sufficient to deliver all the essential nutrients. You can also go for your homemade dog feed prepared with veggies, milk, meat, eggs, whole grains, etc under the supervision of your veterinarian. Also not forget to add mineral and vitamin supplements and essential salt along with homemade dog feed.
The amount of feed eaten by your dog depends on the size, age, activity level, and metabolism. Not all dogs require the same amount of feed just like people. The quality of the food you are offering also makes a difference.
Keep eye on the calorie consumed by your dog to keep the best shape of your Dobie.

This breed is mostly washed and wears a breed. Regular grooming is sufficient to keep your mobile in its best look. Quick but proper grooming maintains the coat shiny and healthy.
Bath is not compulsory often. The nail should be regularly trimmed. You should not forget to clean its ear as it is more prone to an ear infection.

Like other breeds. Early socialization and puppy training are essential for this breed also. You should expose your new pup to new people, sounds, sights, and experiences. This will ensure your puppy to grow up in a well-rounded dog.
They are easy and fast learner but needs to keep the lesson fresh and interesting. They are generally not stubborn or wilful with the owner offering consistent and kind leadership.

It is a highly energetic dog that needs plenty of exercise. They enjoy long walks with their owners. You can also make your dog participate in canine sports like obedience, agility, and tracking. This will provide exercise to the dog both physically and mentally.

This is a healthy breed but some conditions like bloat, hip dysplasia, cardiomyopathy, albinism, retinal atrophy may run in their family.

Doberman Pinscher price in India varies within the range of  ₹5,000 to ₹20,000. If you are lucky enough you might get it at less price. So try your luck and all the best.

The Doberman Pinscher, or Doberman Pinscher among North American and Canadian dog breeds, is a medium-sized breed of domesticated dog primarily developed around the 1990s by German-born veterinarian Karl F. Doberman.

The Doberman has a short muzzle with a high, pointed crest that sits higher than the dog’s skull. It stands erect on its hind legs and is never heavy-footed. Its head is low at the top, broad at the back, and tapering at the side. Its teeth are very small and oval in shape.

The ranchers of this breed should stand upright with their legs apart to display the most confidence and self-assurance. The dog’s forelegs are straight, and its tail will be high and tapering at the end.

This breed tends to have a sweet nature, although some claim that it is aggressive towards other dogs and pets. Some claim that the Doberman pinschers temperament is one of the most difficult to train of all types of dogs.

Some say that the Doberman pinscher temperament is one of the most difficult to train of all the dog breeds. This is primarily because they tend to be highly irritable and when they don’t get the attention that they crave, they become aggressive and over-aggressive.

It’s important to remember that the Doberman pinscher temperament is a working dog and therefore needs exercise daily. Although they’re active, they are also very social. In fact, they work better in a large group than alone.

So this was all about Doberman Pinscher and we have also mentioned Doberman price in India. I hope this breed impressed you.
Thank you