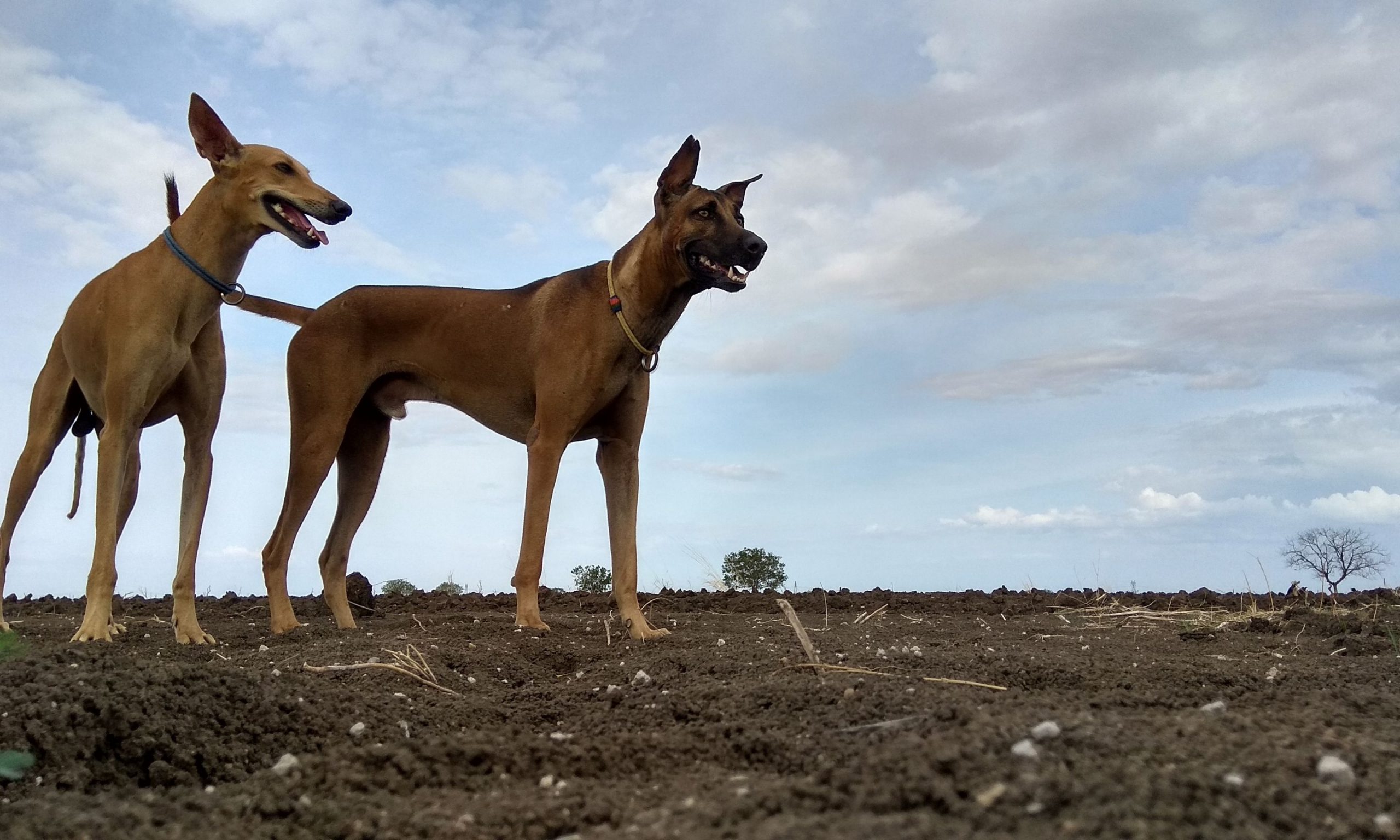 Kombai dog is mostly found in Tamil Nadu in the province of India. This dog breed is also known as Combai Boarhound as they have powerful jaws, the Kombai or Combai dogs look similar to some of the Indian Pariah dogs, but it is stockier.

Its ears in the front are V-shaped and pendant folding. The shorthaired coat comes in red or brown with a black muzzle. It has some black coloring on its feet and ears and dark coloring along its back.

The more similar colors of red, brown, and tan with a black muzzle are called Karuvaisevalai or Karumunjinaai in the Tamil language.

Their history might go back as far as a hundred years, but it might end soon, everyone thought there are efforts to maintain the breed, it is not looking good for the mighty Kombai.

Unlike in breeding for appearance, weak was not selected by breeders. They seem to live for up to fifteen years, but again, it is hard to tell Puppy.

The armies of the Marudhu Pandas used Kombai breed dogs, who headed the revolt against the British subjugation of the Kalaiar Koil of the Sivakasi Kingdom at the beginning of the nineteenth century.

Back to the fifteenth century and historically, we can trace they are known to have been bred to hunt wild boar, deer, and bison.

Some of the Kombai breed Dogs are natives of South India who believe that the breed of Combai dogs existed even as far back as the ninth century.

They are popular in South India and are celebrated as not just strong hunters but loyal family pets.

This dog is alert, eager, and Intelligent. They are also aggressive and savage. Kombai dogs are best with an even-tempered owner, who displaying a natural, but gentle authority over the dog.

The Kombai is good with children, and it has a natural tendency to hunt. Kombai dogs do a great job guarding its home and property. The Kombai dog is used for hunting wild boar and other big game such as bison and deer.

The diet is Start with 100gms of rice with a boiled egg plus recommended doses of calcium and other supplements as directed by the Vet.

As they grow ten to twelve-week, then reduce his feed to 3 per day with 150gms of rice and 100gms of boiled chicken included.

For the afternoon feed try giving him boiled carrots, French beans, boiled & mashed potatoes, or an apple or peach after removing its seeds.18 to 24 weeks switch their feeding to 2 per day with two Jowar Bhakri (but this is not sure to get it at your place) plus 150gms of chicken & 1 to 2 boiled eggs per meal, this might sound slightly expensive diet, but we can always substitute the chicken with non-salted cottage cheese diet.

The Kombai dog price in India starts from Rs 5,000 to Rs 9,000. But you can get the puppies at a low price in some places in India.

Kombai dogs are not dangerous, but they can be very protective of their owners and territory. They are known to be loyal, alert, and responsive to their owners. Kombai dogs can be aggressive if they feel threatened, so it is important to socialize with them from an early age and teach them how to interact with other animals. It is also important to provide them with proper training and exercise to ensure that they stay healthy and well-behaved.

How to identify a Kombai dog?

Kombai dogs are a type of Indian pariah dog that is found primarily in the regions of Tamil Nadu and Kerala in India. They are known for their loyalty and intelligence and are considered to be one of the oldest breeds of Indian dogs. Kombai dogs are medium-sized with short, thick fur that is usually red or brown in color. They have long, pointed ears and wedge-shaped heads with a long muzzle. They have muscular bodies with deep chests and long, curled tails. They have confident, alert expressions and usually have a black masks on their face.

Kombai dogs, also known as Combai, are an ancient and rare breed of working dogs from Tamil Nadu, India. They are known for their bravery and loyalty and are highly prized as guard dogs. They are medium-sized and have muscular, square-shaped bodies with short and dense coats. The color of the coat can vary from red to black and tan. Kombai dogs are intelligent and very alert, making them excellent watchdogs. They are also known for their strong hunting and tracking abilities.

Where can I find the original Kombai dog?

Kombai dogs are quite rare and can be difficult to find. You may have the most luck contacting breeders in India, as they are the original source of the breed. You can also search online for breeders that may be willing to ship the dog to your location.

Is Kombai a street dog?

Kombai is a street dog story about a brave and loyal dog that embarks on a journey of survival and friendship in an urban environment. He befriends an elderly woman, and together they find courage, hope and a place to call home. Along the way, Kombai must confront his own fears and learn to trust humans again. With the help of his new friends, Kombai finds the strength to become a hero and protect the ones he loves.

Where can I find the original Kombai dog?

The original Kombai dog is found in the Southern Indian state of Tamil Nadu. They are not readily available outside of the region, but some breeders have started to ship them to other countries. You can search for Kombai puppies for sale online or contact local breeders in the area.

Kombai dogs are intelligent and loyal. They are known for their strong protective instincts and can be trained to perform a variety of tasks. They are also very intuitive and can be easily trained to understand commands.

What is the Kombai dog’s life expectancy?

Kombai dogs usually have a life expectancy of 12 to 15 years. However, this can vary from one dog to the next, depending on factors such as diet, exercise, and overall health.

What is the Kombai dog color arrangement?

Kombai dogs generally have short, coarse, and dense fur that can range in color from red, yellow, white, black, and tan. Some have lighter or darker shading on the face, legs, and tail.

Kombai dogs do not have a particularly strong or unpleasant odor.

They are not considered to be particularly friendly. They are independent and can be aloof with strangers. They can be a bit suspicious of new people and may bark at them. Socialization and positive reinforcement training are important for Kombais to learn to accept people and other animals.

What are the qualities of a Kombai dog?

Kombai dogs are loyal, intelligent, and courageous. They have strong protective instincts and make excellent guard dogs. They are also very loyal to their family and make great companions. Kombais are known to be independent and strong-willed, so they require an experienced owner who can provide consistent training and structure. They need plenty of daily exercises and mental stimulation to stay physically and mentally healthy.

What are the bad qualities of Kombai dogs?

Kombai dogs can be aggressive toward strangers and other dogs.

What are the good qualities of a Kombai dog?

What is the history of the Kombai dog?

The Kombai is an ancient breed of Indian dog, believed to have originated in the Tamil Nadu region of South India. The earliest records of the breed date back to at least the 15th century, when they were used as guard dogs. Kombais have also been used as hunting dogs, and their strong sense of smell and loyalty make them excellent guard dogs.

They are capable of working in all kinds of terrain and can be trained to hunt small game. The breed has traditionally been used to guard homes, livestock, and even temples, and is sometimes referred to as the “Temple Dog”. They are well known for their courage, loyalty, and intelligence.

The Kombai is a large, strong dog, with a distinctive square muzzle and a short, dense coat. They come in a variety of colors, including yellow, red, brown, black, and white. The average life expectancy for a Kombai is about 12-15 years.

What are the hobbies of Kombai dogs?

Kombai dogs are an independent breed and therefore do not require a lot of attention or exercise. They enjoy activities such as tracking and hunting, as well as agility and obedience training. They also enjoy long walks, playing fetch, and
spending time with their owners.

No, Kombai dogs do not hate kids. In fact, they are generally very friendly and loving towards children. They are also known to be very protective of their families, and will often bond closely with the children in the household.

Kombai dogs, like all dogs, can be particular about certain things. They do not typically like loud noises, being left
alone for long periods of time, or having their routine disrupted. They also do not like being teased or scolded.

Kombai dogs are easy to train?

No, Kombai dogs are not particularly easy to train. They are fiercely independent and highly intelligent, which makes them difficult to train. It is important to be patient and consistent when training these dogs and to reward their successes.

Kombai dogs are an ancient breed that originated in India and are best suited to warm and humid climates. They do well in both rural and urban environments but should be kept in a securely fenced area to protect them from predators or other dangers. Kombai dogs are known for their intelligence and loyalty, so they do best in an environment where they can form strong bonds with their family.

This dog breed is calm, but firm, confident and consistent pack leader. Tigers were an ever-present threat as the massive growth in India’s population drove them from their forests and into contact with humans.

The Monthly keeping cost of Kombai dogs is a Premium of eight thousand and as a Standard Rs. Twenty-five hundred. These dogs are increasingly rare mainly because they’re no longer used for their hunting roles and the need for guard dogs disappearing due to modern technology.

Few people can afford or want to keep this breed in India. They are in real danger of going extinct, Like many of the sighthounds of India. Kombais were bred with protection in mind.

They had to be tough, fierce, and loyal, enough to take down a tiger or a bear, or die trying. The breed also had to guard its territory, and the purpose of the Kombai was slowly lost.

They have less popularity as a breed as few people could afford to keep a dog just for the pleasure of it.